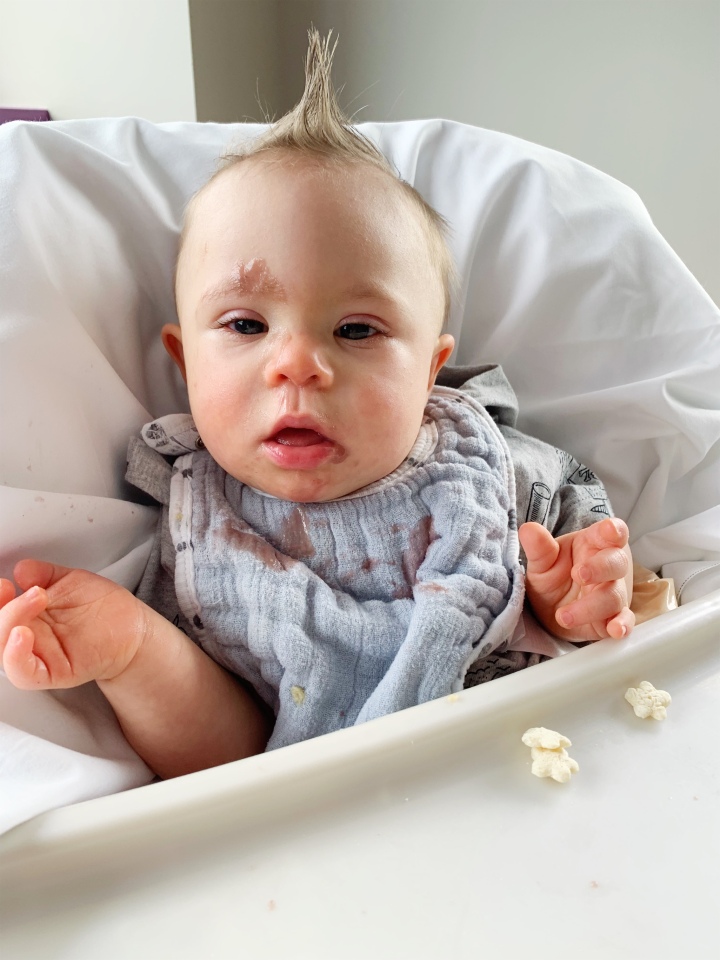 I like to joke that you would never guess Logan ate from a feeding tube for the first 5 days of his life. He’s a chunky monkey that likes to eat everything and anything you put in front of him. And if you’re eating something, you best believe, that yep you’re going to learn to share! So naturally, when feeding therapy was suggested, I was a little confused?

He’s a champ at taking down his bottles lightning fast, which has come to require that we cut open the nipples (old Cuban traditions) — so that he can huff down the liquid mud we make his formula into. He’s basically drinking his oatmeal out of a bottle.

We even, put his compota’s in there as well.

He also eats a whole bowl of Abuela Milly’s homemade purees, which contains all kinds of delicious goodness. Beans, meat, chicken, potatoes, rice, vegetables, spinach… you name it, he eats it.

Apparently, cutting the nipples is frowned upon by health professionals, and it’s time I let Logan learn to play with his food. Yes, it’s great that he eats well, and is of a healthy weight. But no, there are certain milestones he should be meeting which he is not. Primarily, we need to build the strength of the muscles within his jaw and cheeks, to give him the correct stamina he needs to chew. Right now, he’s a bit lax in that department.

Ask me if Logan can hold his bottle?

Can he chew soft solids?

Does he chew on puff cereal or children’s teething cookies?

-Can he drink thin liquids from a bottle?

These were things which were worrisome, but I didn’t think too much on. After his Feeding Therapy Evaluation, though, there are a few changes we’ll need to start making to his eating routine. Starting with new bottles, {eye roll here}. Ask me how many times I’ve heard this schpeel lol

Follow along to get updates on how he does!